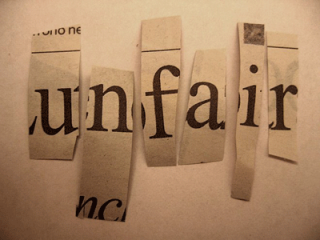 Didn’t you always hate that phrase growing up?  Inevitably, at some point in your life, you heard it.  Maybe you asked your parents for permission to do something that EVERYBODY else was getting to do, and they said no.  You of course responded with…”that’s not fair!”  And they of course responded with, you guessed it…”LIFE’S NOT FAIR.”  It’s one of those things we’ve all heard over and over throughout our lives, and as we grew up, like it or not, we realized the truth found in that statement.  Maybe now that you’re older, you might have even said it to your kids.

As you look around the world, you see that everybody seems to have been dealt a different hand in life.  Some people are born rich, some poor.  Some are born smart, some dumb.  Some people are born into healthy families, some not so healthy.  Even among people living on the same block, some homes are peaceful, and prosperous, while others are warzones with driveways.

The fact that life’s not fair is nothing new.  Look at the parable Jesus tells in Matthew 25:14-30.  Here you have a story about 3 guys, who are dealt 3 very different hands.  One is given 5 bags of gold, one is given 2 bags, and one is only given 1.  Now that doesn’t seem very fair does it?  Seriously, if the owner had wanted to be fair, he would have given each of them an equal opportunity, right?  But the fact is, he didn’t.  He’s the owner, so he gets to decide how it’s divided up!  Fair?  NO!  But remember, LIFE’S NOT FAIR.

Take the guy who was given 2 bags of gold for example.  He could have played the victim card, and whined, and complained for not getting five bags of gold.  He could have easily said “that’s not fair.”  But he didn’t.  He RESPONDED to his circumstances well.  He did well with WHATEVER it was he was given.  He responded very different than the guy who only received 1 bag of gold.  If the guy who had received only ONE bag would have simply responded well, despite his circumstances, he would have shared in the reward.  Because the  man with only 2 bags responded to his unfair situation well, he shared in the same reward as the man who had been given 5 bags.

Here’s the point.  We take RESPONSIBILITY by working on our RESPONSE-ABILITY, the ability to respond well in any situation we are placed in.  The truth of the matter is, the world we live in is unfair.  Good things happen to bad people and bad things happen to good people.  It’s just reality.  But while we understand that life may not be fair, we are still held accountable to how we respond to seemingly unfair situations, or hands we are dealt in life.

We all love stories where the underdog comes out on top, applauding those who have gotten the short end of the stick, yet are able to accomplish great things. And if there’s anything that our life-experience has taught us, it’s that life is unfair. Jesus’ parable shows us, we’re all entrusted with different amounts of gold. Taking responsibility for your life means refusing to make excuses for how much you’ve been given and, instead, doing something with whatever opportunities you have. So let’s take “respons-ability” for our lives…

“His master replied, ‘Well done, good and faithful servant! You have been faithful with a few things; I will put you in charge of many things. Come and share your master’s happiness!”
Matthew 25:21