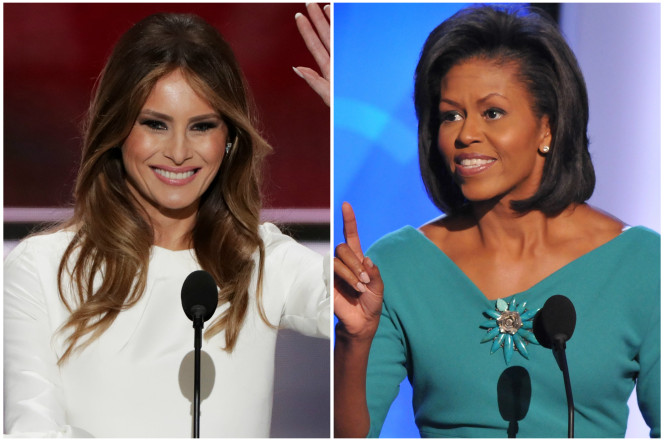 In case you missed it, last night was the opening night of the Republican National Convention in Cleveland.  There was an OCEAN of red-blooded American fervor throughout the day with wave after wave crashing just a bit further up the shoreline of conservative patriotism.  We saw everything from Duck Dynasty’s Willie Robertson guaranteeing that no matter what you face in life, Trump would “Have Your Back,” to Former New York City Mayor Rudy Giuliani promising that Trump would do for America what he did for the city of New York.  But the pinnacle of the night was when Trump’s closest confidant and ally, his wife and possible future first-lady took the stage to talk about her husband, their ideals, and their heart for the future of our nation.

This is where an already shaky train began to come off the tracks.  All in all, it was a passionate, articulate, and beautifully worded speech.  The problem:  SOME (not many to be fair, but some) of those words weren’t hers.  They weren’t her speechwriter’s either.  They came from an unusual and unlikely source…take a look.

Now, I’m not a political pundit, advisor, or even enthusiast so I’m not here to debate the issue.  Whether you believe this was a problem or not for the RNC, the Trump campaign or even Mrs. Trump herself is really irrelevant to me.  I’m sure people will debate about what this does to the integrity of the campaign (if anything) for days to come.  That isn’t my agenda here.

My agenda is to communicate a much more encouraging gem that this “plagiarism” has unearthed from the ashes of what has looked like Rome burning to the ground over the past several weeks.

See, you would have had to have been living under a rock wearing your best pair of Beats by Dre noise cancelling headphones to not realize the seemingly insurmountable division, vitriol, hate, and anger that has flooded our news feeds in recent days.  It seems as if EVERYBODY in EVERY regard has taken a side on a particular reality or circumstance and has taken issue with anyone with the opposing viewpoint.

radical religious terrorists vs. anybody else who doesn’t believe and live like them…

moderate Democrats versus Socialists…and the list goes on and on.

These divisions have led to bloodshed and have fueled the very anger which has led to even more bloodshed.

The life of the innocent is being snatched away right before our very eyes and we as a people have been left reeling in disbelief.  The divisive violence, vitriol, and hatred being poured over you and me (and out of you and me) have left many of us desensitized to the severity of the anguish filling our hearts and homes.

Up until last night, I saw a divided nation, with little to no hope for ever finding common ground in my lifetime.

That was until Melania took the stage.

The moment she begin to utter the words that had previously been spoken by what many would call a political enemy, both of which were followed by enormous support and applause…I saw it.  In plain sight.  As if it’s been there the whole time, just waiting on a slip up like this to create a visible crack in the walls.  Unquestionable commonality…and that’s a GOOD thing.

Look below at the portion of the transcript. 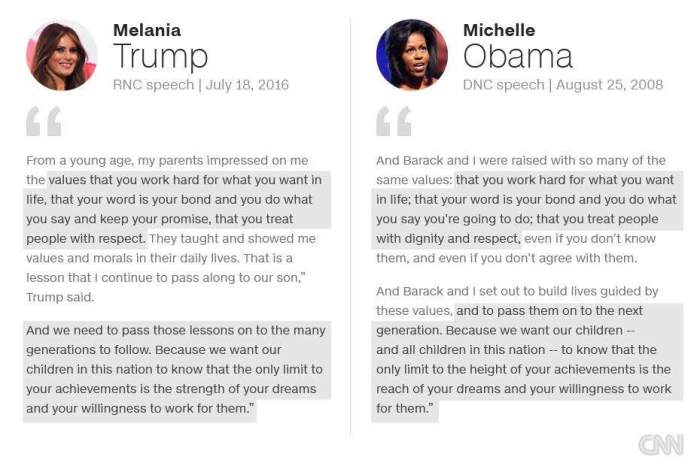 We all believe that hard work pays off in the end.

Whether we are faithful in living it out or not, we ALL believe that keeping your word is the most important thing you can do among your fellow-man.

Deep down behind the anger and frustration, we all believe that human beings from EVERY background are worthy of being treated with dignity and respect.

We all believe that the best thing we could do for our country is to instill these values in our children and grandchildren.

And we all hope, pray, and believe that the sky is the limit for every single one of them as long as they are willing to carry out these values.

Forget policy for a moment.  Forget the content of your protest banner, or the ideology of your movement.  And remember that the very people you disagree with on what’s best for our future AGREE with you on some of these fundamental values.  From Melania to Michelle…and every human in between.

Last night, just a few seconds of accidental “plagiarism” might have very well revealed the very truth this world so desperately needs.  We were reminded that even though BOTH sides fail miserably and continuously at carrying them out, BOTH sides hold certain values in high esteem and want to instill those values in their children. Finding this common ground, despite our differences, enables us to extend grace to the other side.  It enables us to understand the other side.  It enables us to stop seeing people by the labels they wear, but instead by the hopes in their heart.

But so are we.

And these walls MUST. COME. DOWN.