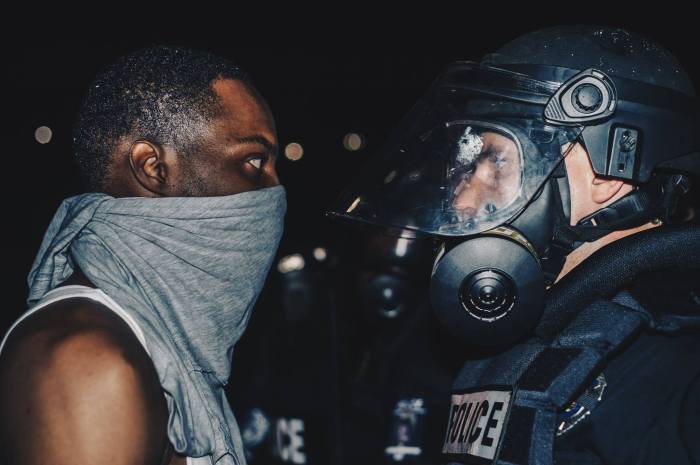 So last night, my wife and I stayed up fairly late to watch a new show premier that she (ok, we) have been looking forward to watching for a while now called This Is Us.  If you missed it, I won’t spoil it for you but let me just say, well done NBC, well done.

At any rate, immediately following what was an emotionally charged ending to a spectacularly written show, breaking news flashed across our television screen.  As soon as the “breaking news” graphics and local news logos faded from view, we were met with images of anger, frustration, and pain fueled riots, protests, and chaos.  We saw police officers in full riot gear, smoke rising into the air, law enforcement vehicles under siege…and the all too familiar signs that read “black lives matter.”

After a moment or two of this imagery capturing my periphery, the local desk anchor began to speak.  As he read the freshly typed words off of the teleprompter, I began to realize that these protests were in response to an officer-involved shooting and death of an african american man…that took place earlier that day…in CHARLOTTE.

No, these images that we were watching live weren’t from Baltimore, Ferguson, or Baton Rouge.  This wasn’t old footage from the streets of Dallas.  I quickly began to realize these were scenes that were playing out in real time…in MY city.  What was once a headline from another part of the country immediately became a narrative that directly affected my own friends, and their families.  I was watching scenes of chaos unfold just a mere few minutes from the very church I have the privilege of pastoring.

I watched as police officers who weren’t even present during the original shooting do their best to maintain composure while attempting to restore law and order, all while trying to de-escalate a very tense situation.  I watched as anger, pain, and loss from an entire community of people poured out in the form of riot and protest against authorities they feel threatened by rather than protected by, whether that is the intent of the majority or not.  I watched as chaos engulfed peaceful streets, and as frustration that had obviously been quietly brewing for months and years under the surface finally broke through people’s filters.  I watched my city burn, in more ways than one…and I was heartbroken.

But I’ve come to realize that heartbreak is pointless if it’s accompanied by inaction.  We can allow the pain invoked by these scenes to send us into a spiral of depression or cynicism, OR, we can respond.  We can sit idly by, and allow chaos to rob our city of it’s joy and hope, or we can become peaceMAKERS.  See I’m convinced we have the capacity to be bridge builders in the face of division, but it will require something of us…something we hold dear.  It will require us to lay down our agenda, preferences, and platforms.  It will even and almost especially require us to do so in the face of those who refuse to do the same.

But what does that look like?  How do we make peace in the midst of pain?  How do we build authentic unity in the face of cynicism?

I’m convinced it starts with listening…a word our status update box doesn’t really afford us much of these days.

Today, I spent time listening to the officers in RIOT gear.  I listened to their mothers and fathers, to their husbands and wives, and I heard their fear over escalating violence, and their frustration with misconception and blanket labeling & assumption.  And I responded with…”I HEAR YOU.”

See, the key to resolving ANY conflict is conversation, and at least 50% of any conversation should be listening.  The problem is, we do a LOT of talking, and share a LOT of opinions, and stand on a LOT of platforms.  But how often do we listen?  How often do we ask those DIRECTLY involved and affected by a situation our questions…and then honestly seek to understand their response.

How often do we DROP our preconceived opinions and notions at the door before beginning said dialogue?

See, I’m convinced that THIS is how we begin to make peace.

THIS is how we begin to build bridges.

This is how we begin to take ownership of our city…OUR city…and begin to heal what’s been broken.

This is how we have HONEST dialogue in our city…where ALL parties are heard and understood, and change is made.

This is how we take an honest assessment of our situation…by listening, understanding, and responding to what we hear.

The first step to solving any problem is recognizing there is one…and Charlotte, we’ve got one.  We can’t mask it, sugarcoat it, blame a demographic on it, or excuse it away.  Here’s the bad news…those images last night…Charlotte…THIS IS US.  But the good news is…it doesn’t have to be, and I don’t care if it takes a thousand conversations…I’M NOT GIVING UP ON US.  I’m ready to listen, and understand.  I’m convinced we can do better…we will do better.

I WON’T GIVE UP ON US…and you shouldn’t either.