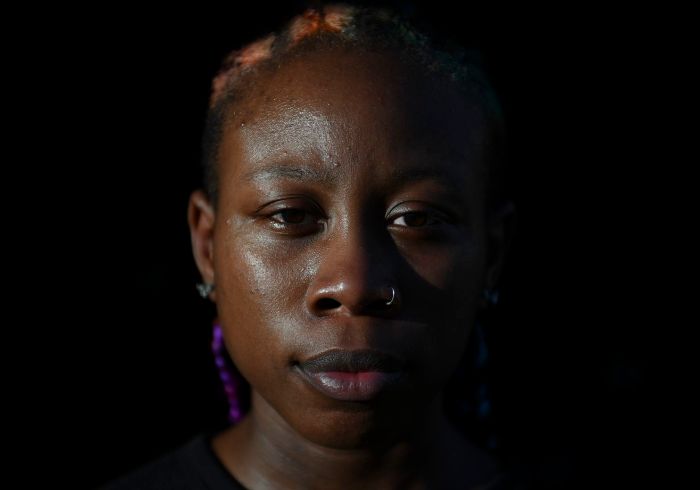 Several nights ago, just minutes from where we live, a local mom experienced what I’m sure will go down as the single most painful, confusing, traumatic, and tragic nights of her young life.  (But unfortunately, the days that followed haven’t been much better.)

As the historic rain and damaging winds in our state from Hurricane Florence began to subside on Sunday evening, and people began to get out of their homes for the first time to assess the damages, Dazia Lee of Charlotte, & her 14 month old son Kaiden got in the car and headed out to his great grandmothers house, located about an hour away.

Along the way, Dazia came upon some construction barricades sitting on the sides of the two lane road she was traveling.  Her assumption was that those were placed there earlier in the day when the roads were impassable, but had since been moved to the sides since the rain had stopped, and just hadn’t been picked up yet.  Her assumptions were affirmed as she looked ahead and saw cars traveling towards her through the barricaded stretch of road seemingly without issue.

But as Dazia began to drive through the standing water, her vehicle began shifting sideways and spinning due to the current.  Even though the depth of the water on the road was shallow, the current was still far too strong for her car to maintain traction on the road.  As her car was pushed off the road, it was quickly swept up into waters that exceeded 10 feet in depth, and had the current of a raging river.  Her vehicle slammed up against a tree and water began to fill the car.

Like any concerned mother would do, she immediately unstrapped her son and placed him in her arms.  As the windows had already been busted out from the impact, and the weight of the water pressed against the doors, she recognized that climbing through the broken glass was their only way out.

As she was climbing out, her foot got hung on her seatbelt.  So as she tried to reach down to free herself, water and debris begin to slam her in the face.  While all of this was going on, little Kaiden began to slip from her grasp.  She went from holding him in her arms to barely hanging on to his forearm.  And just like a dramatic scene from a movie, her grip slipped from his arm, to his wrist, to his fingers…until the force of the water overtook them, and he slipped out her grip.  She screamed.  Her baby was gone.

And there she was, at 12:23am, in the middle of nowhere…wet, tired, emotionally destroyed, and alone, with the weight of the unknown resting squarely on her shoulders.

She held onto hope until the moment she got that dreaded call.  She prayed in agony that somehow, her precious baby had gotten pushed off to the side of the water.  But tragically, that was not the call she received.  At 10:20am the next morning, her fears were confirmed.  They had found his body.  Her baby was gone.

As all of the media reports from the night before began to update their stories with the news of the child’s death, the comments sections on social media began to fill.

And not surprisingly, they weren’t filled with notes of sympathy, or words of condolence for this young mother that had just walked through the worst night imaginable.  But rather vitriol, disdain, disgust, and frustration over the decision this mother had made to unnecessarily put her child in harms way.

“What an idiot!” “Charge her.” “She deserves the same thing that baby got.” “She’s not fit to be a mother.” “How could you be so naive.” “That’s what the freaking barricades are for!” “Does she not watch the news?” “What a careless b!$ch!”

And thousands more…but you get the point.

This woman’s car and clothes were still dripping from the tragic flood waters that had snatched away her son, and the stones were already flying.

It was as if people were standing on the proverbial moral high ground with the perfect 20-20 clarity that hindsight provides, and were lobbing the rocks they had found beneath their dry feet toward the head of this grieving mother still standing in the low lying waters of regret and shame.

Maybe it’s because I’m a pastor and I study the scriptures for a living,  but as I began to read the comments and the sense the anger from the mob, all I could think about was the moment in the eighth chapter of Johns gospel, when the crowd brought a woman to Jesus who had been caught in adultery.  This woman had obviously made the decision to break the law and obviously deserved to be stoned, RIGHT?

In the same way, it was obviously this young mothers bad decision to drive her son out on unknown roads when the news and authorities had instructed her to stay home.  And it was obviously her bad decision to go past the barricades that led to her son being in the dangerous waters that night.  And she obviously DESERVED to be held accountable by those who had chosen to stay on higher ground…RIGHT?

I love Jesus’ response.  According to John’s gospel, Jesus spoke up and said “RIGHT! SHE DESERVES TO BE STONED. HOW ABOUT THE ONE HERE WITHOUT THEIR OWN SIN, WITHOUT THEIR OWN MISTAKES, YOU GO AHEAD AND CAST THE FIRST ROCK!”  He then knelt down, and began to write in the dirt.  Now we aren’t told what he was writing, but I can only imagine that Jesus began listing out the private sins of those who were holding the rocks.  Once people began to realize their OWN shortcomings, or more realistically, for fear of being outed, people began to drop their rocks and bail.  The mob was no longer an appealing place to be.

See, the problem with taking the moral high ground is that it doesn’t actually exist.  It’s a fantasy world we like to live in, but in truth, we are ALL standing neck deep in our own river of regret.

Jesus was saying, “you guys like to act like you’re better than her, but the truth is, you’re no different than her.  Your sin, mistakes, and shortcomings may look, sound, and smell different this woman’s, but you deserve no less than what you’re asking to be done to her.”

In other words…”you’re standing on a moral high ground that doesn’t actually exist. Because you’re all actually standing on equal footing.”

The truth is, there is only one who has ever had the authority to stand on a moral high ground and judge us, and He was the one who bent down, looked at the woman bearing the weight of her all of her mistakes and said…”I DON’T CONDEMN YOU.”

And I for one am so glad that there isn’t a moral high ground for you and I to stand on in judgement of those who’ve made mistakes or have regrets.  Because the mob we see judging this young mom this week is a picture perfect example of how we would handle it.

I’m even more glad to know that JESUS is the one who IS afforded it.  Because He chose to look down at us in the river, step off the hill, step into the raging waters of our lives, as tears stream down all of our faces, put his arms around us, and say “I don’t condemn ANY of you.”

The only one who’s ever had the ability to stand on the moral high ground used it as a launchpad for grace.

And now, He’s calling us to follow Him.  But how best do we follow Him?  Is is by trying to pretend like we’re as good as He is.  Of course not.  But rather, by extending the same mercy, grace, forgiveness, compassion, and understanding that He’s extended to us.

So the next time you hear about someone or know someone that royally screws up, even if that screw up has hurt someone else, don’t be the person standing on some non-existent moral high ground with rock in hand ready to strike.  Because were it not for grace, the royal screw up could be you.

Instead be the one that gets down in the dirt with the accused or the guilty, and whispers in their ear, “I don’t condemn you…let me help you up, we’re putting these mistakes in the past and together, we’re moving forward.”

10 thoughts on “The Myth of the Moral High Ground”